Add newspaper writing to your resume

by Julie Lavender | Sep 6, 2020 | The Road to Writing: Enjoy the Path to Publication and Appreciate the Scenery Along the Way | 0 comments 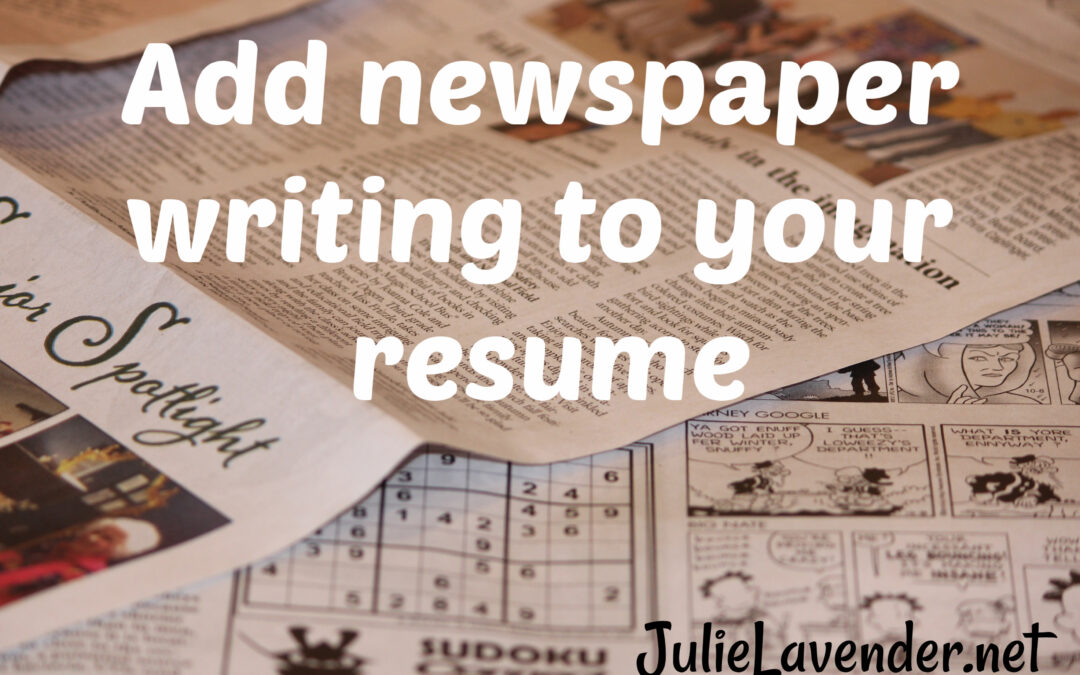 More than 1300 daily newspapers fly off the presses and into neighborhoods in the wee hours of the morning across the United States. And that number only accounts for the seven-day-a-week newspapers. The number stretches when newspapers published once a week or a couple of times each week, or even six days a week like my hometown newspaper are added in.

Newspapers are not dead – that’s “fake news” – though the rumors are true that some are sick and ailing. The launching of the Internet years back caused many faithful readers to cancel their newspaper subscriptions, and a steady decline of local newspaper readership has taken place.

A handful of newspapers in large cities are flourishing; many are just barely getting by financially, and most editions fall between the two. But all continue to need regular, fresh content, over and over again with each printing.

That’s where the freelance writer stands to benefit.

My newspaper, The Statesboro Herald, only has two fulltime reporters, with freelance sports and business editors adding content according to the season or happenings.

And with a county that is home to just over 70,000 people, that’s a lot of stories that go uncovered.

Sadly, the stories that often get overlooked are the “good news” ones, the inspirational ones, the celebratory ones, and most definitely the faith-based ones.

Freelance writers fit the bill to tell those needed stories!

An unpublished or less-experienced writer can break into newsprint often quicker than any other form of media. Newspaper editors, though busy as bees most days, are more accessible than magazine or book editors and will typically reply to emails or phone calls personally. Most are willing to meet face-to-face, too, with advanced notice.

Granted, the pay for a newspaper stringer is nothing to write home about, but the other rewards outweigh the slim paycheck.

The personal satisfaction of sharing a local headline or fascinating story in one’s hometown is often reward enough. To give someone his or her “fifteen minutes of fame” is a real treasure, especially when the story is a heart-warming one or noted accomplishment.

If you’re blessed to live in a town that publishes faith-based articles and stories in the newspaper, your writing becomes a ministry, sharing God-stories and church happenings and Jesus moments. No one can put a price on that!

A byline for an author generally brings a smile, and writing locally often garners comments from friends and family about a recently published, enlightening and fun article.

And if those aren’t enough intrinsic rewards, a writer can often recycle a story by writing a slightly different version for submission to a regional newspaper or magazine, or even a national media outlet, if the story contains a broad readership appeal.

Are you intrigued yet? Have I talked you into pursing newspaper writing? Tune in next time and we’ll discover how to get started. Until then, read newspapers from cover to cover. Check out stories online to see what appeals to readers. Keep your ears open for the events and happenings in your community that might be of interest to others. Get to know those in the community that have unique stories to share.

Most importantly, pray, asking God if He wants you to use newspaper writing as a ministry to further His kingdom right in your own backyard, or shall we say, in your neighbor’s newspaper box!